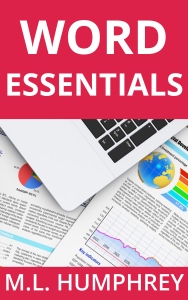 I published Excel Essentials, the collection of the four individual titles in the Excel Essentials series a while back. At the time I didn’t publish the ebook version on Amazon, but that is now available on Amazon for anyone interested.

Also, for at least the next week or so Word Essentials and PowerPoint Essentials will not be available on Apple but they will be there soon. (I’m changing how I distribute my books there and it takes a little longer than I’d expected.)

The books are all available in ebook, paperback, and hard cover but it may take a few days for them to reach all the stores.

As of now I’m done with writing new material on Microsoft Office, but if there’s something specific you want to see that I didn’t cover, let me know and if I think it’s within my skillset I’ll work on it. That’s actually how Excel for Budgeting and Mail Merge for Beginners both came to exist.

It took me over a year to write it because I truly do not like SmartArt and that had to be covered in an intermediate-level guide to PowerPoint (I find people misuse it atrociously), but it’s finally done.

So if you wanted an intermediate-level guide to PowerPoint that covers charts, shapes, WordArt, SmartArt, headers and footers, and a lot more, here you go. (And the paperback and hardback versions on currently almost 20% off on Barnes & Noble for those of you who like print.) Click on the image below for the universal link. 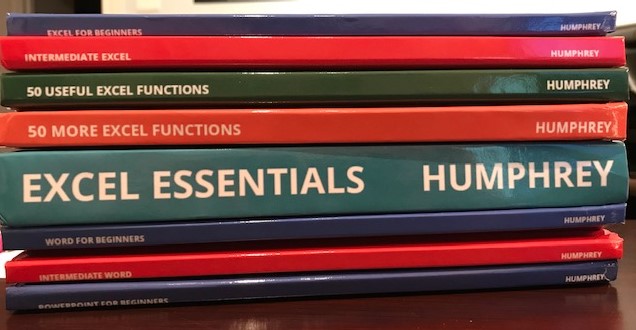 I have to say, I’m pretty excited about this one because the books feel much more substantial in hard cover than paperback. (That Excel Essentials one which combines the other four Excel titles into one book is a behemoth. It’s one inch thick and weighs two pounds! Who knew I had so much to say about Excel.)

The covers are case laminate so there might be a little denting at the edges like you can see on 50 More Excel Functions in the photo, but overall I was pretty impressed with them. And keep in mind with the skinnier ones that the spine text might be slightly off center because of print-on-demand variances, but it will be there on all of them.

They should be available on Amazon (here’s my author page for the U.S.) as well as Barnes & Noble and any other location where you can order print books.

Microsoft is at it again, releasing new versions of its Office suite of products. So new users will have Word 2019 and Excel 2019, for example.

The key issue here, though, is backwards compatibility. Just because you may have the latest and greatest does not mean anyone else does. And using one of those new functions if you’re going to be sharing your files with someone who isn’t upgraded to the latest version is going to mean they can’t use what you send them.

So by all means, upgrade and try the new functions in Excel. But if you intend to share that document with clients or counterparties, be sure that they can use the file you send them.

Let me give you a personal, very painful example of how I learned this lesson the hard way.

Back during the big mortgage crisis I had a consulting client who had a large residential and commercial loan portfolio. And I ended up in a role where I was helping someone who was an expert in calculating a bank’s allowance for loan losses automate that process using Excel. The goal was to create an Excel workbook we could then hand off to the client so they could make that calculation going forward whenever they needed to. When we were done, all they’d have to do is put their current data into one or two worksheets and everything else would be calculated for them.

It took about a week for me to put the workbook together because there were a lot of moving parts, but I finally had it ready to go and handed it over to them to test.

(Now, I should add here that for a long-term solution Excel was not an ideal choice. But for something they could have up and running in two weeks? It was probably the only choice. And this was at a point in time where bidding things out and taking six months to build a technology solution were not options.)

So, anyway, I handed it off.

The client came back and said they couldn’t use it. Because it relied, in part, on using the SUMIFS function, which was available in my version of Excel but not their version. And getting a large corporate client to upgrade their version of Office is not a simple process, especially during the midst of a financial meltdown where it was very possible that company wasn’t going to exist in six months.

So I had to spend a couple days rewriting that whole workbook to remove the use of every SUMIFS and replace it with multiple IF functions in multiple columns that could accomplish the same result.

It was not fun.

Thankfully, I worked for the type of boss who didn’t blame me or yell at me for my mistake, just told me to fix the issue. If I’d been working for a different client or a different boss that whole situation could’ve been much much uglier than it was. As is, it was bad enough.

So remember: keep in mind who you’re working with when you create an Excel workbook (or even a Word document or PowerPoint presentation) and make sure that they’ll be able to use what you give them when it’s done.

(I should add here that all of my current Office guides are written using the 2013 versions of the products–so Excel 2013, Word 2013, and PowerPoint 2013–and with most of it compatible back to the 2007 versions, partially for these reasons.)

First, I have a new release out if anyone is interested in learning Microsoft PowerPoint. Paperback available here and ebook available all over the place.

By the end of the day I’d settled on one of the romance novels and a non-fiction book to work on over the next two months.

And then I took my dog for a walk this morning.

By the end of the walk I had realized I could actually tweak a non-fiction title I’ve started and finished about ten times now and probably finalize and publish it in the next week. So I’m probably going to do that instead.

(This is how I have managed to work almost exclusively on non-fiction for an entire year now. Because non-fiction is so much easier for me to write.)

I really should know better by now…