As a writer sometimes it’s hard to tell if you’re on the right track. Sometimes it’s obvious. If you have a thousand five-star reviews on a book you can bet that book has found an audience. And if you win awards or see people talking all the time about how wonderful your book is, that’s another one. Obviously, people writing to you and telling you how much they loved your book is also a good sign.

But most books don’t have a thousand reviews, good or bad. And most books aren’t so amazing that they generate buzz. And most readers aren’t going to drop you a line even if they love your book.

So a couple things I look for when it comes to a series of books:

First, I want my top also-boughts to be the rest of the books in that series. The theory is that also-boughts are generated from the list of how many people who have bought Book A have also bought Book B. If your other books aren’t in the top of your also-boughts then that means more people who bought your first book bought someone else’s book rather than your next book in the series.

To me that says that the first book they bought had potential but that it didn’t meet that potential.

This is less true in non-fiction than in fiction, but I do still look for it with my non-fiction titles. Here, for example, are the current also-boughts for Excel for Beginners: 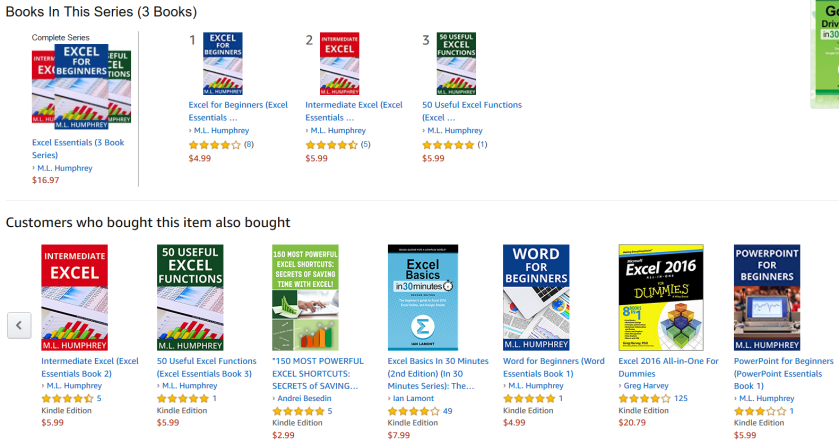 You can see here that there are four other books of mine in the top 7 also-boughts and that the two Excel titles that are in the same series as Excel for Beginners are in the first and second positions.

Even after a big promo I still expect to see this, because I expect people to buy my second in series more then they bought other books promoted on the same day. Here are the also-boughts for Rider’s Revenge in the UK. It had an international Bookbub a couple weeks ago:

A promo might mix up the also-boughts beyond those first few positions, but my books should always hold the top spots.

Second, I want to see that my review average is increasing as the series continues. This is definitely more for fiction series that must be read in order. The theory here is that with book one you’re going to attract readers who are not your reader, especially if you run price promotions that let people sample your work for free or 99 cents.

If your review average is going down as the series progresses, then you’re somehow not satisfying the readers who did like the first book in the series. Mayeb you gave them the literary equivalent of cotton candy in book one and then offered them mussels in book two. You don’t want to do that. You want to keep the readers you found satisfied.

So, for example, here are the Goodreads ratings for the Rider’s Revenge series.

You’ll see that there are fewer reviews as the series continues, but that the review average went up as the books continued (from 3.75 to 3.94 to 4.25). If instead book 3’s review average was a 3.25, I would known that I’d failed to end the trilogy in a way that satisfied the readers who had stuck with the series to the end.

Now, granted, it’s not a perfect way to measure if you’re doing well with a series. (I actually consider the Rider’s series to have been a bit of a commercial failure. It took until just now to breakeven.) But it is one way to judge a series performance.

And it can tell you other things about your writing.

So, for example, my contemporary romance pen name has two novels and a novella. If I look at the also-boughts for each of the novels the other novel is in that #1 slot, but the novella is not in the #2 slot. It’s in the top 5 of the also-boughts for each novel, so it’s up there, but not right at the top. That’s because not all novel readers are novella readers and so that difference in story type means lower sell-through to the novella.

It’s also not the same characters, which could be another part of it.

That tells me that for that name I’m better off writing another novel than a novella. And perhaps staying in the same story world.

So if you’re seeing that your other works aren’t in the top of your also-boughts, ask yourself why. If it’s a related series, then you’re not hooking readers into continuing somehow. If you’re writing standalone works then it could be a different length or different type of story issue. Figuring out the cause and fixing it can make a significant difference in how well you do going forward.

Just something to think about…

(And note that I chose examples where this was actually the case as opposed to the ones for my books where it isn’t. Trust me, I have ones where this isn’t the case.)

M.L. Humphrey is a former securities regulator, registered stockbroker (although only briefly), and consultant on regulatory and risk-related matters for large financial institutions with expertise in the areas of anti-money laundering regulation, mutual funds, and credit rating agencies. Since 2013 M.L. has also been a published author under a variety of pen names and across a variety of subjects and genres. View all posts by M.L. Humphrey